The Iron Horse and Okabena

On April 22, 1879, the Southern Minnesota Railroad began work on extending the track westward through Lakefield and Okabena. It had been the intention of the railroad to extend the line straight west from Jackson to the state line, passing through the village of Worthington. But early in 1879, the plans were changed and the new decision was to run it diagonally across country.

The survey was made and it was decided that it would cross the Sioux City Railroad at Praire Junction (Miloma). The track laying was completed on August 1st and regular service to Fulda began November 3rd.  Because of the extension much more land was opened up for settlement.

Weather conditions were not at all favorable. There was a terrible blizzard in January of 1881, which blocked the Milwaukee road and freight was piled up for three days. When the storm abated, five heavily loaded freight trains started west but a drift about one mile west of the Jackson bridge prevented further progress. Three trains followed in rapid succession, but were unable to move the one ahead either forward or backward. This snowstorm caused much hardship because of lack of food and fuel and the impossibility of reaching the needy. By April 17, the Milwaukee was finally opened and freight was received at Okabena. Then came a flood from the melting snow and nearly 1,000 feet of the track was swept away by the Okabena Creek. It was several days before train service was once again restored because the bridge had been swept away by the raging water.

It is not known how the railroad handled freight traffic without a resident depot agent, although, some grain and hay were about the only commodities moved in the earlier years. The town never “took off” until 1898, at which time Victor E. West was depot agent. Among other agents who were here for a time were Adam Parker, Mr. Gilson, who later moved to Airlie (Kinbrae) and Wm. E. Widel. Mr. Floyd G. Barr came in 1913 and proved to be a very popular agent. He had the second longest tenure of all agents, remaining here 16 years, or until 1929, when he was transferred to Coleman, South Dakota. Following him were Hesler, from 1929 to 1933, Theophilus, one year, and Mark Banks from 1934 to 1937. Maynard C. Bloom came in 1937, and established the longest period of employment, from 1937 to 1960. Others who were here for a short time were Frank Hartwig and Minnie Killian.

As the town of Okabena began to grow the railroad put much advertising in the local papers. Low 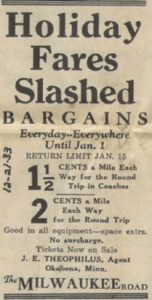 rates for both passengers and freight was offered. Holiday rates were often as low as 1 ½ cents per mile. (Ad taken from the Okabena Centennial Edition.)

In the early thirties there were two daily passenger trains, two daily freights and sometimes extras. The freight trains carried stock, tile, lumber, grain, and supplies for the grocery stores. The Milwaukee Railroad built and maintained the local stockyards in Okabena for many years. They built new sheds, added new gates and fences, maintained a much-needed water supply and did repair work as necessary. After several years the Milwaukee Railroad dismantled the stockyards.

In 1926, the Nelson Construction Co., of Chicago, installed a water softener near the trestle, at a cost of $17,000.00. In 1934, a refrigerator car carried by a westbound passenger train derailed and tore up 5,000 ties over a stretch of two miles. Section foreman Edward Hotzler and crew repaired the damage. The train schedule was not disrupted. On August 30, 1951, the Milwaukee packed a big train through Okabena; it consisting of 71 cars and two locomotives. The cars were westbound for the Dakota wheat harvest.

Edward Hotzler served as section foreman for many years. Living on several farms as a youth, he moved with his widowed mother and brother into Okabena about 1898, living in the upstairs portion of the Brown building. Edward was working at this time for the Milwaukee near Miloma. According to an interview in the Okabena Press in 1949, he received $1.10 for a ten-hour day; then was cut in time to three days per week and then two, with wages 11 cents per hour for a 9-hour day. He was transferred to Hatfield where he became Section foreman for $50.00 per month. In 1912, he returned to Okabena and worked until 1949, having a total of some 52 years of service.

Agent Bloom felt that the people should know how much the railroad contributed to the town. He paid for an article in the Okabena Press which stated that the Milwaukee paid the Village of Okabena $1,125.00 for their water assessment besides granting an easement for installing water mains on their right-of-way without charge. This was in addition to the general taxes paid by them each year going to the village and school district.

On April 3, 1952, two flat cars arrived in Okabena with the segments of the new water tower. The larger pieces of steel weighted about 85,000 lbs.

As trucks started hauling grain and stock and smaller trucks delivered grocery items to the stores the railroad business began to decrease. Trucks began hauling the mail and the Milwaukee lost the contract for mail. More and more cars on the roads were prevalent and consequently the railroads passenger business suffered. Passenger trains were discontinued and the trains became “mixed”. Later the passenger service was stopped and traffic limited to freight.

In 1960, Mr. Bloom was transferred to Fulda and Kinbrae and Leona Stillwell moved here from Alpha. Okabena could boast of a lady agent, but not for long, as the depot was soon closed and work handled by the Lakefield operator. In 1963 the railroad discontinued passenger service.  In February, 1968, Mr. Bloom was transferred to Lakefield and stayed there until retirement on December 31, 1970, after having served 48 years.

In the early seventies Victor Fleace tore down the depot. An occasional train came through Okabena and caused about as much excitement as when trains were first coming in and still a novelty. Talk of abandonment of the line from Jackson to the South Dakota terminals began in the late 1970s.

At an organizational meeting in April of 1978, rail users along the Milwaukee Branch line from Jackson to Pipestone decided to form a non-profit corporation. “Minn-Kota Transportation, Inc.” was organized primarily to protest the pending abandonment of the 86 miles of track from Jackson west to the South Dakota State line.

The users organized in an attempt to convince the Minnesota Department of Transportation to join them in their attempts to preserve and improve rail service on the line. The users also filed a “petition to investigate” the reason for the abandonment application with the Interstate Commerce Commission.

Interstate Commerce Commission consented to allow the Chicago, Milwaukee, St. Paul & Pacific Railroad to abandon branch line tracks from Jackson, MN to Egan, SD. Service could be terminated as soon as July 28, 1979. The 98-mile long line served communities in Jackson, Murray, Nobles and Pipestone counties. Cities that would have service on the branch line eliminated were Lakefield, Okabena, Miloma, Kinbrae, Fulda, Iona, Chandler, Edgerton, Hatfield, Pipestone and Flandreau. Area towns on the branch line had been served by approximately one train every other week, as service had been curtailed because of the fuel shortage.

In a curious development the Minnesota Department of Transportation called a hearing “to determine whether rail freight agency service should be transferred from Sherburn, Alpha, Lakefield, and Okabena to Jackson and whether the four stations should be closed.” At that time Elwood Simpson, station agent at Jackson, visited the cities in question to complete paperwork for shipments. Under the change the shippers would go to him in Jackson instead.

Conclusion:
There doesn’t seem to be any documentation of exactly when the trains stopped going through Okabena. But after a lot of research on the topic, most of the residents contacted agreed that it was probably sometime in the later 1970’s. The tracks going through Okabena were probably removed in the early 1980s and the land eventually sold back to area landowners. The corporation dissolved in 1990.  (If anyone has any corrections or additions please feel free to submit the information by using the information on the contact page.)